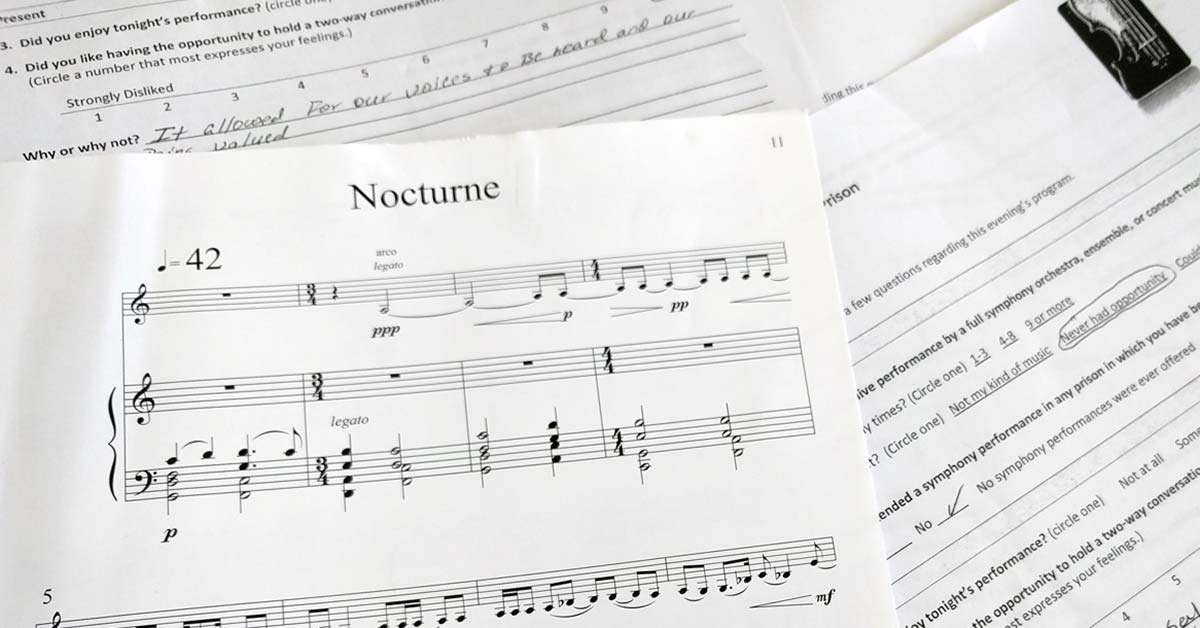 It’s been nearly a month since performing a recital in Walker State Faith and Character Based Prison. The experience was no doubt memorable, but after finally reading all of the surveys prisoners filled out and notes jotted down by prisoner mentor, Alan Bonderud, it was clear we had something uniquely special.

The reoccurring theme on the prisoners’ surveys was the impact they felt sharing their emotions or interpretations while experiencing each musical work. There was a distinct value placed on the living composers works and that sentiment was also mentioned a number of times within the surveys.

According to the surveys, it was as important to have an open discussion after each piece as it was to include living composers’ works on the recital. For the survey responses, the phrase It was nice allowing our voices to be heard kept appearing over and over again.

Prisoners’ experiences and reactions varied with each piece, but the frequent statement of the importance of sharing one’s emotion and one’s impression was extraordinary and meaningful.

Likewise, it was important to have the living composers’ voices heard. From the survey responses, the phrase I liked being introduced to modern composers’ works was another common reaction. For living composers, there can often be obstacles or frustrations when a new piece is written. The work can be promptly ignored or poo-pooed by the public or performers because it is new and/or unfamiliar. Getting these works played was allowing for voices on both sides of the spectrum to be heard, and that is exactly what music should do.

The comments on the surveys indicated a profound connection with what the living composers wrote, more so than the Bach I also included during the recital. Stories, emotions, impressions all seemed much deeper with works by composers Marc Mellits, Jim Stephenson, and Jennifer Higdon.

The living composers’ voices were heard very distinctly that evening, and point counterpoint, the prisoners’ voices were heard as well. Our musical conversation is just the beginning into finding relevance and meaning in all of our emotions. And as human beings, that is exactly what we all need.

For all works on the program, I played a small sample to get ears and minds primed. A brief discussion of prisoners’ emotional take or impressions of the works were shared. Fostering an open discussion like that puts Walker State Prison apart from the stereotypical prison scene. Below are a few impressions taken from the surveys and notes during the discussions.

For Marc Mellit’s work, Zubrowka, prisoners described happiness, like a kitten chasing a butterfly. One prisoner said it sounded like his nine-year-old daughter endlessly chattering, and another envisioned running freely in the woods occasionally stopping for soul searching moments.

For Jim Stephenson’s cadenza from his violin concerto, Tributes, there were a couple of stories from a few men. One stated that listening to the three minutes took him on a journey from his childhood. He was young again, learning to ride a bicycle and his father was constantly encouraging him. He would fall off and his father kept saying, get back up! By the end of the cadenza it was success, the prisoner described riding successfully but then shared that his father had passed away a few years back and this music made him joyful at first with the memory, but then nostalgic.

Jennifer Higdon’s work, Nocturne from her String Poetic sonata, brought out the most amazing coincidence. On one half of the room sat prisoners, on the other half sat some of our Chattanooga Symphony patrons, board members, and executive director.

While I played Nocturne, there was the same impression, unsolicited and unknown from a member of each side of the room.

One prisoner felt his mother’s presence.

“I lost my mother in November,” he wrote. “It made me feel terrible knowing I was not by her side. This music was like a dream of her, like I see her, she tells me it’s OK and she says, ‘I’m ok.’ I felt real comfort in that.”

But the most amazing similarity was being experienced on the other side of the room.

After the recital, Jean Hawkins said she wanted to share with me her impression of the Nocturne, but would have to write it down because it was an incredibly emotional moment for her. With her permission, I will share the note:

This is a little background on what transpired for me on Saturday evening, April 2, 2016 at Walker State Prison during the concert presented by Holly Mulcahy.

I am a visual artist and am taking a year-long art class online.  The assignment last week was to visualize an image of “our lady of compassion.” It was to be a visual with no particular religious or spiritual influence, but that could be acceptable if it was what “came” as part of the vision.  As the vision came, there was to be healing or forgiveness of self for burdens carried. I did not have time to actually do the lesson that week, nor was I particularly inclined to participate in the lesson.

When I was enjoying the wonderful music that Holly presented that evening, the art lesson was the farthest thing from my mind.  As Holly began the Nocturne by Jennifer Higdon staying on the one note played so expressively, my mind engaged in a vision that became for me – my lady of compassion.  I felt I was washing dishes at my sink in the twilight of evening, enjoying the smells of early spring, damp earth, fragrances of flowers I could not identify, and the peace of the evening.  My mother, who passed away four years ago, appeared to me quietly and gently just as she was when she left, with her very thick glasses, lovely white hair and warm smile.  She came to me and took my hand, leading me to the kitchen table where we had tea. She stroked my hand quietly and said, “I am very happy and well where I am now, and I do not want you to carry the guilt that causes you pain anymore. You took good care of me in my last years and there is no place for the guilt you feel.” It was a beautiful time with her. Then she disappeared into the evening light. It felt like I had spent quite a while with her but it was only for the duration of this piece. It was very hard to come back to the place where I was sitting!

The comments the inmates made in response to the piece were startlingly honest and revealed much healing emotionally.  I was amazed as one man said he had experienced a similar vision to mine, seeing his mother, resolving some hard things with her, and her gentle departure at the end of the piece.

The entire concert was so well presented and excellently performed.  Words cannot completely convey what I felt and what I continue to feel as a result of this experience. As one inmate expressed to me, “it was beautiful and sad, it hurt but in a good and healing way.”  I believe all who participated are changed by the experience and received a lovely gift in the music performed.

I am not sure how this will all transfer into my art but I am sure with more soaking in the vision, the art will come.  I am very thankful to have been at this concert and to have heard this piece in particular!

Allowing the voices to be heard turned out to be the unofficial theme of the evening. Prisoners, living composers, and even a gentle maternal voice was felt. The power that music has is boundless, especially if it is not restricted with agenda or insincerity. We humans just need to be present and curious; amazing things happen when one listens with an open heart and mind.