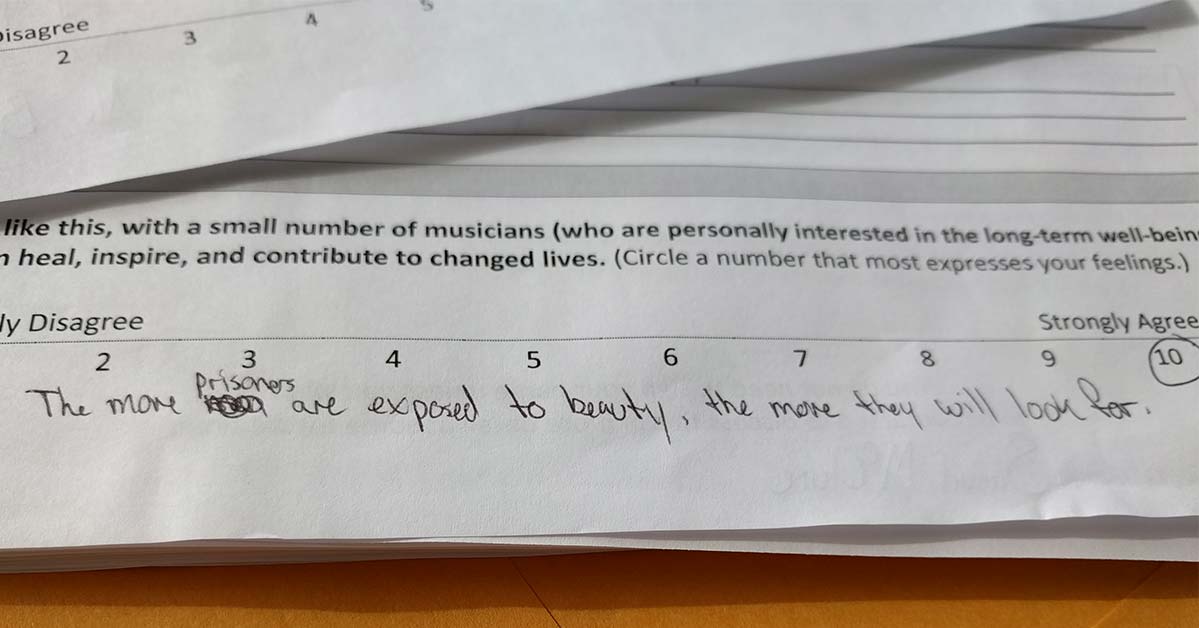 Returning to Walker State Faith and Character Based Prison this past week once again left me with more than I brought in.

Joining me on the hour-long recital was Nashville cellist and social worker, Michael Samis. The recital began like it did the last time I played for the men in Walker State: a sample was played and initial impressions were freely shared by the 130 men in the prison gym. The impressions from the prisoners as they shared their thoughts of each piece were touching and I will share those in my next blog. But first, the impressions taken off the surveys we handed out offered some powerful statements.

“I had to wait till I came to prison to experience this kind of music.”

The first question on the survey was: “Have you ever attended a live performance by a full symphony orchestra, ensemble, or concert musician?”

Many prisoners said they never had the opportunity nor could afford attending concerts prior to being incarcerated. But there was a distinct appreciation, a palpable need for keeping live music in their lives.

Talking with prisoners after the performance it was said again and again: “I didn’t know I needed this until now,” and, “I wished I knew about this type of music before.” 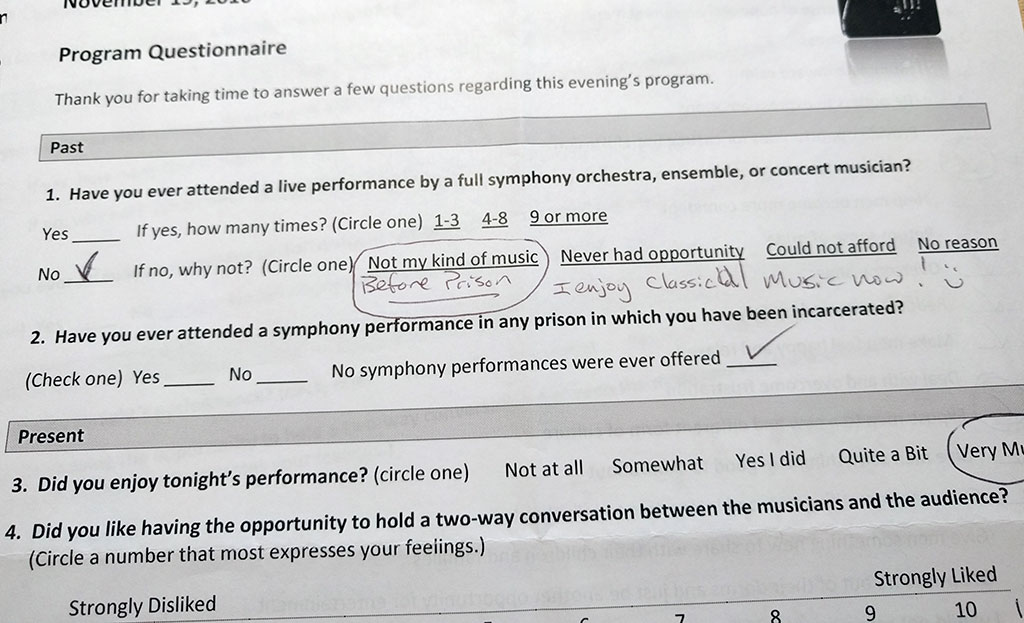 “The more prisoners are exposed to beauty, the more they will look for it.”

When people are surrounded by certain influences, they become familiar and comfortable with those influences. This is called ‘mere-exposure effect,’ a psychological phenomenon by which people tend to develop a preference for things merely because they are familiar with them.

It is not a far-fetched idea to introduce prisoners to classical music in hopes they will seek it out further during their prison term and after they are released. Judging from my past visit where many prisoners downloaded one piece I performed by Jennifer Higdon after I left, this is not implausible. The seeking of beauty will continue. Read some of their comments on the most recent surveys:

“I’m in love with the way music talks to my heart.”

“Peace, joy to the depth of my soul.”

“The way it opened my heart up and it took stress off me.”

“It caused us to really feel at a deep level.”

“Music goes past the mind and straight into the heart.” 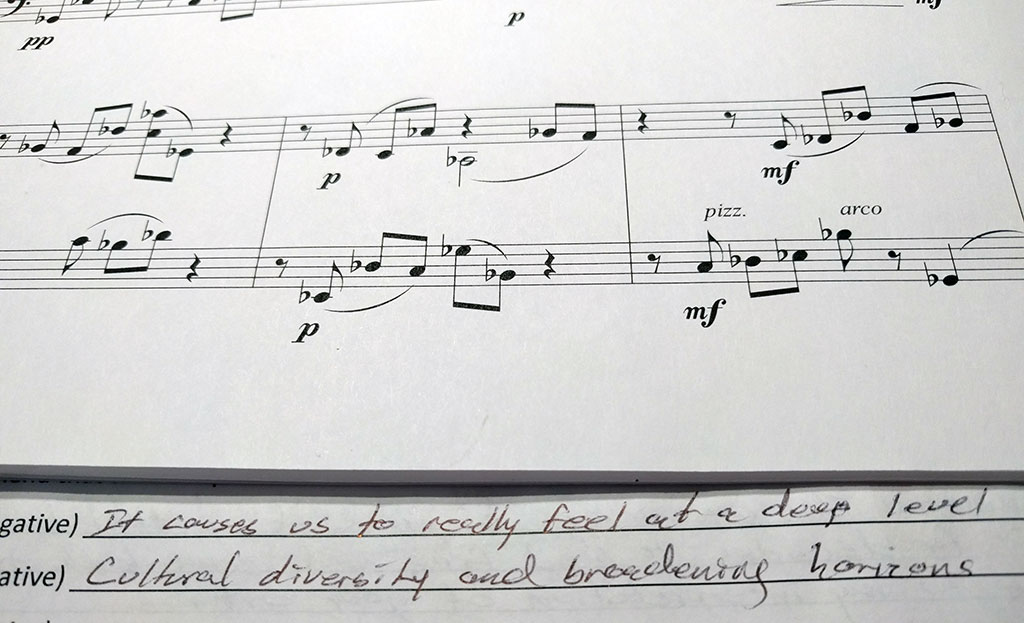 “I didn’t know how much I would miss art and culture until it was gone.”

Not all the men were classical music newbies. One man, a former Atlanta Symphony season ticket holder, told me after the concert that he had taken music and art for granted. How many times have we taken any kind of music or art for granted? For me, music is a part of my life daily, but I must admit I take it for granted more than I should!

Several men put in their surveys that they appreciated and sought a different type of culture or diversity of art with more purpose after being incarcerated.

One prisoner developed an interest in classical music after he came to prison. He shared with me that he started listening to NPR and the syndicated show From The Top with Christopher O’Riley which helped him look back to society with a new appreciation and inspiration.

“This encourages a piece of me that has been locked away for decades to break free and come back to life.” 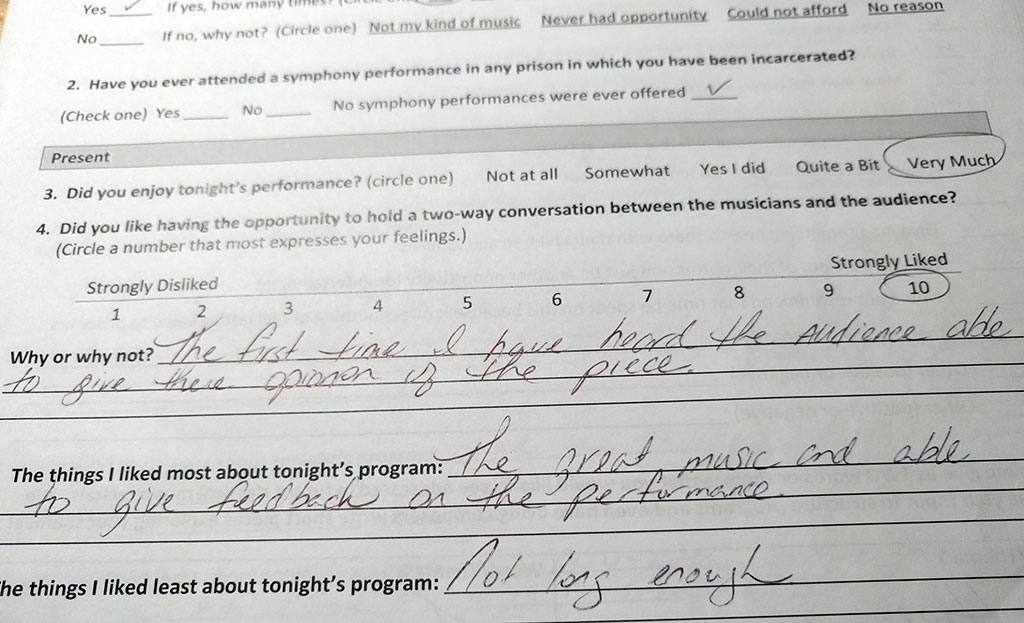 Just like the first performance in April, we discussed each piece after it was played. After stating there would be no wrong answers or interpretations, I again invited everyone to share their thoughts of the works they heard. It was a recurring comment on surveys that hearing other prisoners’ impressions gave an expanded appreciation of the music and added an empathetic point of view.

The whole experience for me this past time visiting Walker State Faith and Character Based Prison left me thinking how we use music and art in our society. We have initiatives that focus on music education and outreach, but are we reaching far enough? Sincerely enough? Because clearly the importance, need, and discovery of culture is deeply important to the prisoners at Walker.

In my next article, I will share the prisoners’ thoughts about the music we performed. But here’s the spoiler: Once again, the works of music I was the most tentative to share, the most modern and freshly composed, were the most talked about and most needed. And with that I will leave you with one final thought from a comment on the surveys:

“I like that some of the composers will be told our thoughts and feelings about their pieces.” 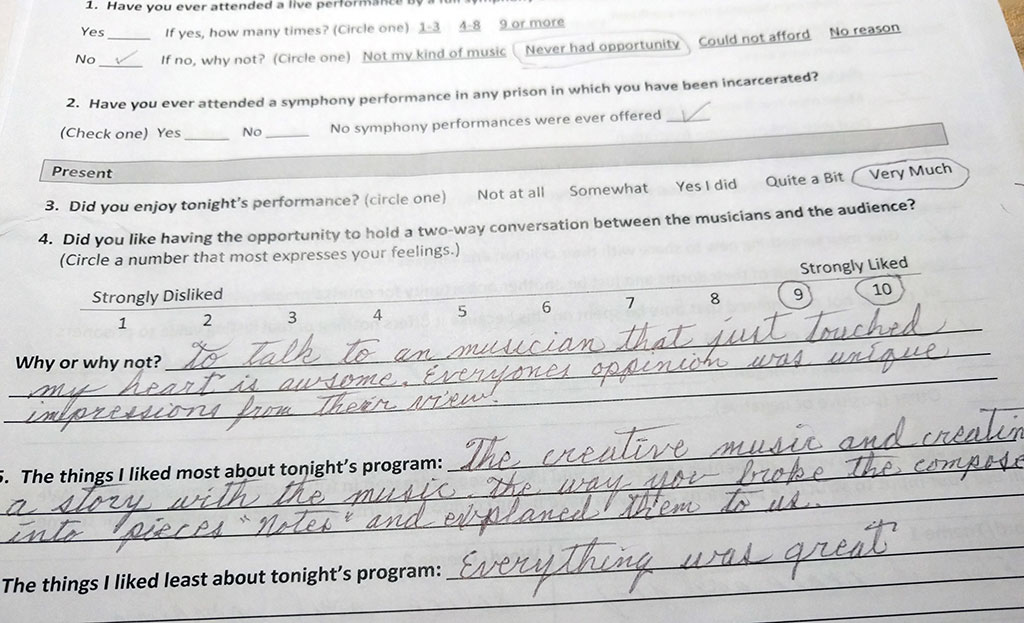