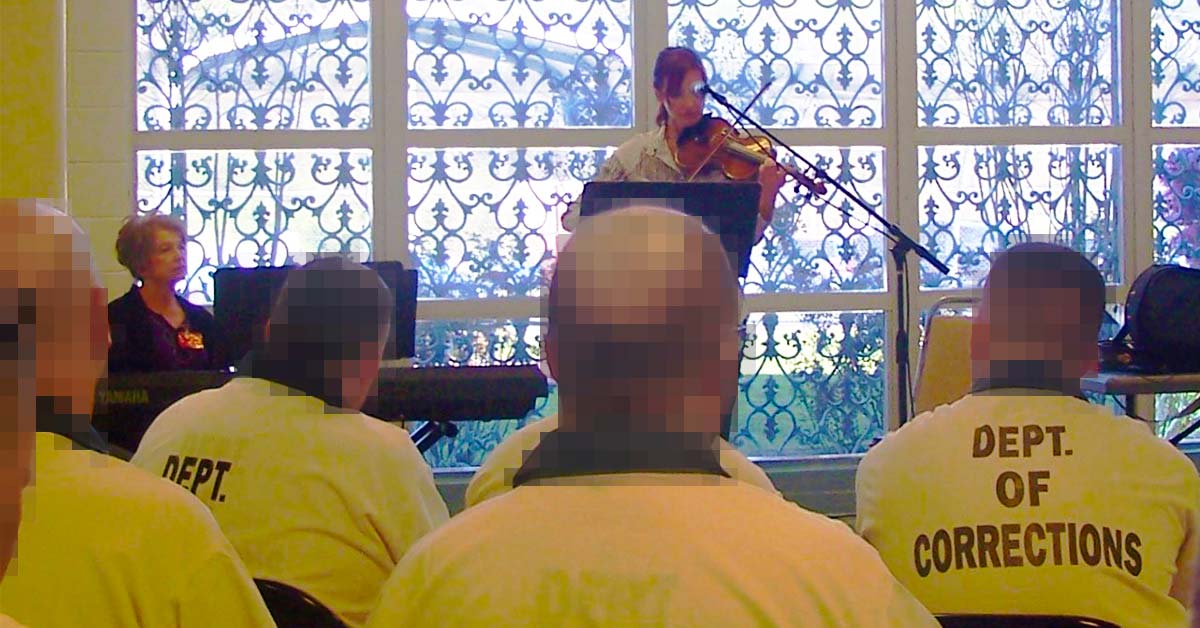 It is next to impossible to sum up the feelings, the emotional impact, and the shared experiences at the recent violin recital in prison. Performing at Walker State Faith and Character Based Prison was one of those career highlights you don’t really expect, but are utterly grateful for.

I published an article leading up to the performance, covering the plan, the reasons, and the hope for sincere impact in the lives of people who are working hard at self-improvement in a challenging environment and/or time in their lives. My expectations were exceeded.

While many orchestras and chamber groups have done the prison concert thing, and have done it well, I wanted to approach the concept from a very different angle. With the guidance of Chattanooga Symphony patrons Alan Bonderud and Steve Hawkins who both mentor at the prison, we were able to achieve a unique conversation and interactive recital that served multiple purposes with the utmost sincerity.

The goal was to provide a medium for people to access emotions, use music as a coping mechanism, and a way to offer a new outlook. The concert program was designed around the conversational aspects and the use of tension and release in J.S. Bach’s Partita #2. Continuing the conversation into the 21st century was imperative and relevant so I chose three living American composers’ works to complement the Bach.

After meeting at the Tivoli Theater to gather for a caravan/carpool to the prison, many Chattanooga Symphony board members, friends of the CSO, and executive director eagerly anticipated their first trip behind bars.

When the program began, Deputy Warden Jeannie Kasper introduced me. I thanked the men for being present and then played the very opening of the first movement of the Bach. I stopped after about 10 seconds as planned; it was necessary to get the ears and minds primed. This was not a recital in the traditional sense, this was an exploration of emotion, of vision, and an offer to own the music and the impact.

“What do you hear in the music, what does it make you feel, what do you see in your mind’s eye?” I asked after 10 seconds of Bach. I was really hoping there would not be any shyness, and fortunately four prisoners quickly raised their hands to share their impressions of the opening statement of the work. Since some of the prisoners had musical experience in the prison choir, there was a good balance of interpretations and opinions.

In between each Bach movement I played a living American composer’s work and we did the same thing. I would play a small sample, the men would give initial impressions and then I would complete the works, and we would discuss in greater detail. 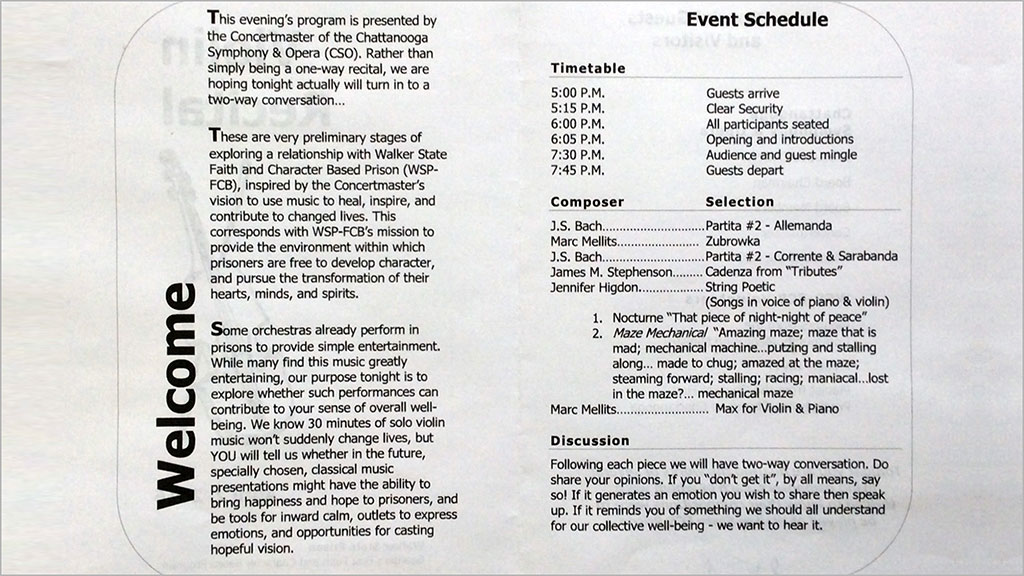 The stories and emotions shared by the prisoners after hearing each work was astounding. One work reminded a man of his children playing in the street, laughing and running. Another work reminded a man of his mother he recently lost; he said, “I lost my mother in November. It made me feel terrible knowing I was not by her side. This music was like a dream of her, like I see her, she tells me it’s OK and she says, ‘I’m ok.’ I felt real comfort in that.”

One prisoner said, “There are feelings, that once you get to prison, you have to put away. You cannot bring them up in prison. You cannot talk about them to other prisoners or anybody on the prison staff.  It can lead to bad things. You learn to keep them down and out of mind. Classical music goes way down there where you have put all your thoughts and lets you think about them and have those thoughts again in your head. And you can deal with them. This music is so powerful. I have been in prison for 15 years and I have never seen or heard anything like what we had here today. Thank you so much.”

There were stories and some heavy thoughts for every movement, every composition. But it was some of the words in the post-recital survey that revealed the most. I haven’t gone through all of the surveys yet, but a few statements initially popped out.

Did you like having the opportunity to hold a two-way conversation between the musician and the audience?

“Much more personable, it made us part of it; not just an audience.”

“It allowed for our voices to be heard and our opinions being valued.”

“At first I didn’t like the aspect of conversation but then as we had more and more interaction I saw and heard things in the music I would not have heard without the conversation.”

Things I liked most about tonight’s program:

“It added a definite positive environment and an opportunity to experience something that is not common in the prison environment. Tonight I didn’t feel like an inmate.”

“Being introduced to modern composers.”

“Expressing one’s own opinion and concept of what one has just heard.”

“The emotions that were brought out.”

At the end of the recital, after I put away my violin, the deputy warden said the men had a thank you gift for me. I didn’t know what to expect, but she went on to say it was a copy of my violin. The two men who crafted this exquisite piece of art walked to the front of the room and presented it to me. It was made of cardboard, hand painted with stunning artistry. They had worked a month in this creation of gratitude, and I almost lost myself in emotion at that point.