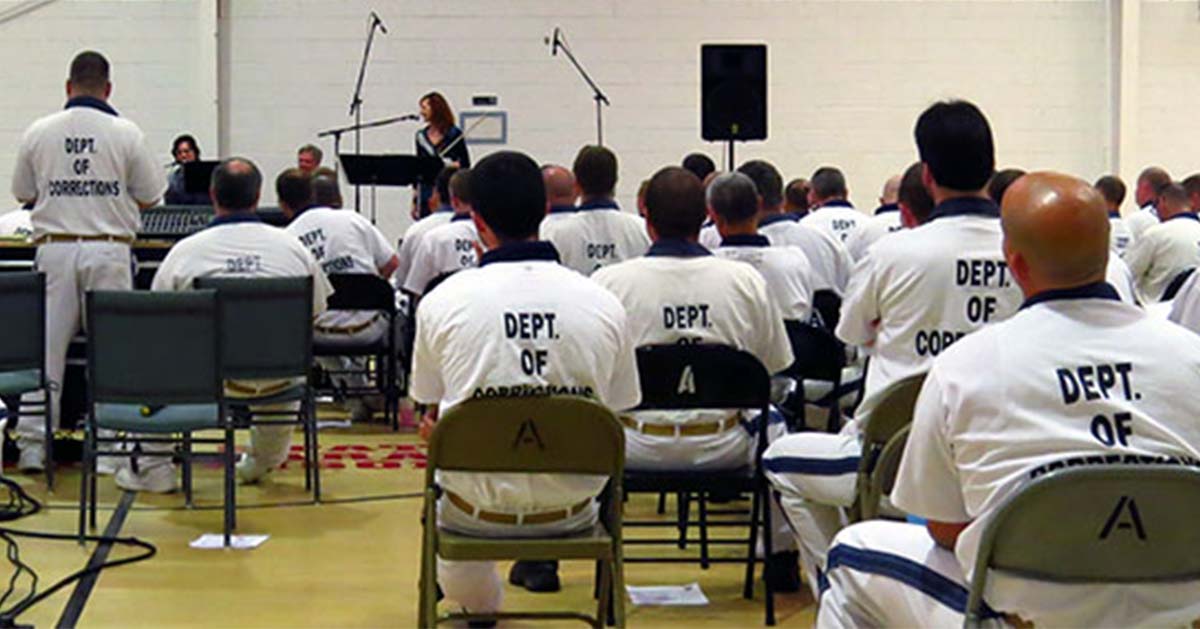 The first time I performed in prison we discovered prisoners put great value in sharing their opinions. They knew their thoughts would be shared directly with the composers of the works they heard and that made them feel like their opinions mattered.

The second time I performed in prison we gained a deeper appreciation for the power of music, especially contemporary music. Hearing directly from the prisoners how new works evoked emotions and thoughts helped shape the planning for the third prison performance. The theme of the third performance was chosen by the prisoners: Love and Hope.

Creating a program of music based on Love and Hope sounds easy. But how each person views and values both of those words is very different. For my third performance in Walker State Faith and Character Based Prison, I chose works that could be interpreted either way.

The first work on the program, written by award winning Chicago composer, Mischa Zupko, Rising, for violin and piano (Mischa played the piano part), was welcomed with the same enthusiasm and open minds as Eclipse was in November.

Instead of having Mischa tell the audience of 150 prisoners about his work, the same formula from the last two recitals was started. I asked the men what they thought of the work and here is a small sampling:

“This was a prayer between myself and God. Sometimes there is overlap and that is when I am talking over God. It seems like that is how we pray. I need to listen more.”

“I am reconciling with my daughter. There is a conversation going back and forth. I found it to be like love, so intimate, like a whisper. What you played is like our conversations.”

“100% hope. First sad. I find myself wanting to get out of here. As the day goes on I find it getting better. There is a building up of hope.”

Watching Mischa’s reaction while the prisoners shared their thoughts was amazing. It was clear they understood what the general intention of the piece was. After we listened to the prisoners’ thoughts, Mischa shared his intention of the work and there was a general audible agreement. And from one of the surveys: “The first piece showed my wife and I first meeting. Everything was smooth and great, then there were ups and downs. We were able to come together through it all with hope for the future and our love will see us through.”

The second work on the program was written by award winning Chinese born American composer Wang Jie. The Yearning, first movement from a four-movement work from Wang Jie’s Serenade in Isolation, was for solo violin. This work was chosen because after the first hearing, I couldn’t get it out of my mind. For a piece of music to ask questions the way it did, I felt it was perfect to share with the men in Walker State.

Wang Jie, who flew in from New York to attend the recital, also listened to the men tell us about their views of the work:

“This is music about love. Yearning for love. It ends but still it is in my head. It is a life of yearning and searching for love not attained.”

“This is about hoping to be free. There is a person confined outside this country. They see that there must be more to life than where they are. In their spirit and in their mind, they reach out, knowing there must be something better.”

“I saw two lovers. One passes away. I see hope. It tries to convey to us to love. That hope never dies as long as hope remains in love.”

After we listened to the men share their impressions, Wang Jie shared what Serenade in Isolation meant to her, and again, there was an audible understanding from the men. This was in one of the surveys:

“Wang Jie’s piece made me think about my own longing to be reunited with my son who is 26. Hearing her explanation was encouraging because she talked about the piece being about love that is not reciprocated.”

The remaining two works on the program were the fifth movement from Messiaen’s Quartet For The End Of Time originally for cello and piano, transcribed for violin and piano by Wang Jie; and the fourth movement of Franck’s violin sonata.

Before Wang Jie and I performed the Messiaen, we shared the origin and history of Quartet For The End Of Time. Their comments following the work reflected thoughtful interpretations:

“This is like an artist and the music are one. Only the music understands. And the music is the only thing the artist can relate to.”

“My grandfather was a prisoner of war in WWII.  I think of his story.  He was a Ranger.  A POW three times.  Being tall and blonde and looking much like them, the Germans tried to recruit him to become an SS Trooper.  He warred in his soul over this.  There was much harm and damage done to him by his captors for saying, ‘no,’ but it was far less damage to him than if he had said, ‘yes.’  In this trial, he found freedom and a way to love and happiness.”

Mischa Zupko returned to the piano to perform the Franck with me and some of the interpretations of the men were poignant:

“It reminds me of when I learned to play the piano. I did it with my mother. I sat with her at the bench. I tried to play the notes just exactly like she did. It brought back unbelievable memories of my Mom, learning by sitting alongside her.”

“It was like the time my 10-year-old child had a birthday. I was driving with my other 12-year-old son. They were in the back seat…”

From each of the recital surveys, there is always a nod toward family or a family member. Mentions of relationships with fathers and mothers have always been shared either directly in the two-way conversations during the recitals or in the surveys themselves.

But this past recital I noticed a new trend of prisoners talking more about their children. We knew that the recital programs were often mailed to family members or talked about during visitations. We also knew that prisoners had been telling their children about the music they heard and the musicians they met. And now we are seeing how the music is starting to open doors for families. On the latest surveys, there is mention that one prisoner’s daughter now wants to learn to play the violin. Another prisoner mentioned how the music made him think about his son and how reuniting will take time.

Volunteer prison mentor, Alan Bonderud, says it best: “They want their families to know they are pursuing what I have learned to call ‘legitimate culture.’  They want to share lives after the ugliness and darkness where they spent more time in survival mode than growing, developing, and preparing for release. The families of prisoners, like the families of addicts, learn to be intentional about celebrating the small things that are lovely, right, good, beautiful, and of good repute.”

One prisoner summed up music perfectly: “Music is communication. Communication is the sending, receiving, and replying.” Certainly, music is opening hearts and minds, even offering relationship building commuications. These are all essential ingredients for men, all of whom are up for parole, to succeed upon their release into society.

The next blog will share perspectives from the composers and guests who accompanied me into Walker State Prison. I’ll also include more of the statements from the prisoner surveys. Find out why it was important to the prisoners to experience the music with the composers present! Here’s a hint: “The more I hear and meditate on this kind of music, the more I fall in love with it.”